Construction of the section from km 112+488 to km 142+685 of the Bologna–Milan High Speed Railway, crossing all the territory of Reggio Emilia province: 30 km of railway on embankment that runs parallel to the Motorway from Rubiera to Gattatico.

The works include the construction of the whole railway networks on embankment, bridges, viaducts, the new railway station, the new motorway junction of Reggio Emilia, the municipal and provincial road networks as well as environment monitoring activities.

The works include also the construction of three cable stayed bridges along the new road network of Reggio Emilia, designed by architect Santiago Calatrava and marked by the effect of architecture and harmony as well as by the foreseen suggestive illumination.

The three bridges are in fact illuminated from top to bottom to create a spectacular effect emphasizing their structures.

The central bridge is placed perpendicularly to the motorway and the railway axis. The span length of this stately bridge is 221 meters.

It is a cable stayed bridge with a central arch 60 meters high placed longitudinally to the roadways.

The north bridge and the south bridge overpass two roundabouts near the motorway toll station. The span length of each bridge is 179 meters.

Each bridge structure has a central arch 70 meters high perpendicular to the roadways. 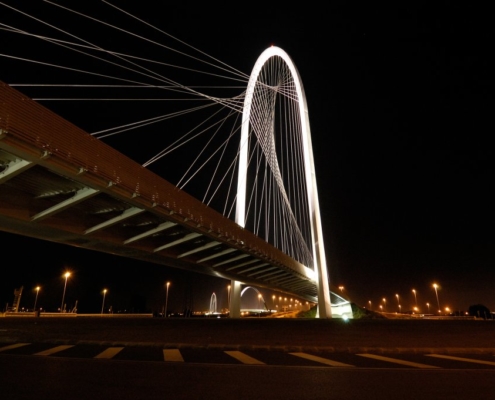 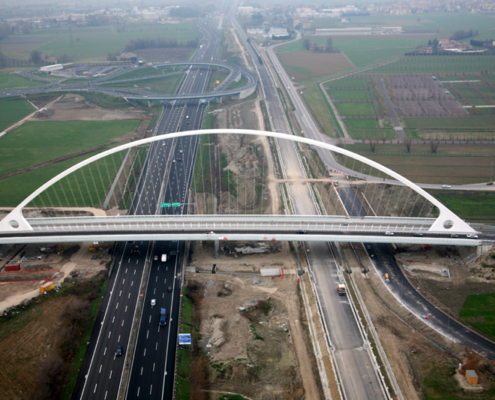 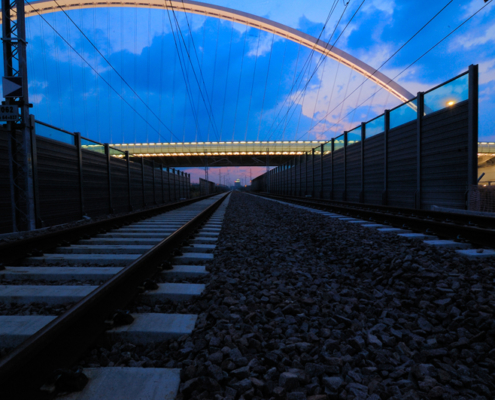