It is considered as the greatest hydraulic work in defence of a built-up area in the Emilia Romagna Region and echoes the well-known “Mose” project for the protection of the Venice lagoon.

The work consists of the realization and the installation of two Vinciane gates, each measuring 6.85 meters in height and 12.41 meters in length with a total of 60 tons of steel.

The two gates, named after Leonardo Da Vinci who conceived the project design at the beginning of 1500, have been tested successfully on 27 April 2004 after 13 months from the commencement of the work.

When the sea level, in consequence of tides, wind and sea storms, exceed the present wharves level (one meter above sea level), the gates will automatically close preventing water overflowing.

The Da Vinci gates are able to protect from a tide up to 2.20 meters above sea level and are moved by hydraulic rams. In order to allow the gates closing, the depth of the harbour will be on two levels: 5 meters before the weir and 4.50 meter after it to form a step of 50 cm against which the two gates will lean. 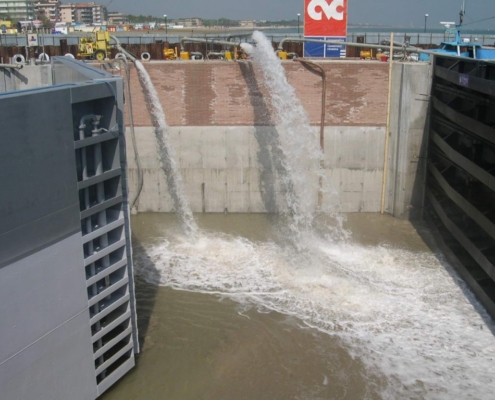