The project consists of the construction of about 570 houses, roads and public buildings (police station, schools, clinic, mosques, Catholic church, administrative buildings, amphitheater) to serve the new village built on an Anadarko company site, in the peninsula of Afungi, in the province of Cabo Delgado, north of Mozambique.

The works have a contractual duration of 24 months and will involve about 40 technicians, including Italians and TCN, as well as about 1,500 Mozambican workers. 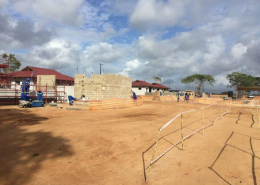